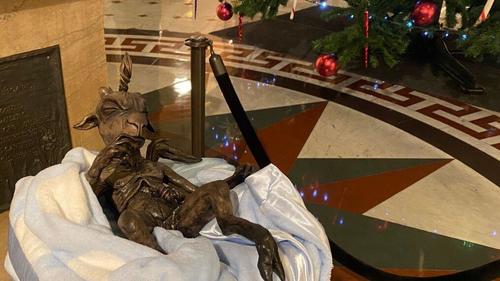 The separation of church and state is a principle fundamental to the United States’ constitution. Along with sanctifying the free exercise of religion, the establishment clause forbids the state from advancing a singular belief system above others. Balancing the diverse religious demographics of the United States is no easy task and its difficulty is magnified during the Christmas season as nativity scenes and other decor often attract objections from those who do not adhere to the Christian faith. This year, the Illinois State Capitol finds itself marred in controversy yet again as Christmas approaches but for reasons entirely antithetical to any display detracted from for advancing the Christian religion.

For the third straight year, the Illinois State Capitol has decided to approve a display erected by the Church of Satan. This is the third display approved by the Satanic religious group, with the first instance occurring in 2018 then again in 2019 with a pause during 2020 due to pandemic restrictions before being showcased again this year. The 2021 edition of the Church of Satan’s display beneath the Capitol rotunda is to mark its holiday of Sol Invictus, which will be observed on December 25th — Christmas day. The “deity” Baphomet is the centerpiece of the display, transformed into an infantile interpretation of the Éliphas Lévi illustration included in the French occultist’s 1856 treatise Dogma and Ritual of High Magic by an Albuquerque-based artist named Chris P. Andres.

Lévi’s image of Baphomet was incorporated into the pentagram designed by fellow French occultist Stanislas de Guaita in his 1897 work The Key to Black Magic which would be adopted as the Church of Satan’s official seal following its creation in 1966 by Anton LaVey. The Church of Satan’s holiday of Sol Invictus is a vestige of the pagan origins of Christmas. Sol Invictus was the sun god within the Roman pantheon of deity’s whose festival was observed toward the end of what was previously celebrated as Saturnalia.

The Cult of Sol Invictus in Rome still remains shrouded in mystery. Some historians view it as a mystery school similar to the Mithraic order that Constantine The Great belonged to while others view it as an Aurelian era revival of the cult of the late Roman Emperor Antoninus, who took the name Elagabalus after the Syrian sun god who he worshiped. Elagabalus was the first and only transsexual Roman Emperor who was assassinated in 222 AD, decades before the Cult of Sol Invictus arose.

Regardless of the history of its origins, the contemporaneous celebration of the Satanic iteration of the holiday of Sol Invictus has been met with expected opposition. Bishop Thomas Parocki of the Diocese of Springfield, Illinois voiced his vitriol of the Satanic display vociferously. The American Society for the Defense of Tradition, Family and Property supported the diocese dissent by convening for prayer at the Capitol.

Despite the outcry against the Satanic monument, organizations opposing it would be hard-pressed to accuse the Illinois State Capitol of advancing one religion over another. Since November 30th, the Capitol has also hosted a nativity scene of the birth of Jesus Christ erected by the Springfield Nativity Scene Committee. The Capitol also hosted a ceremony of the nativity scene on its own grounds when it was completed.

The Sol Invictus display is another instance of the Church of Satan’s public relations efforts. The organization recently filed a legal challenge to the State of Texas Heartbeat Bill claiming that its ceremonial practice of abortion was protected under the first amendment and their rights were violated by the law accordingly. For all its effort on the public relations front, the Church of Satan would have been prudent to invest more in legal research. Laws which act in the general welfare of a state interest like public health affecting but not designed to specifically inhibit religious exercise have been ruled upheld as constitutional following the 1998 case Employment Division v. Smith and subsequent case law affirming the precedent it sent.

For all the benevolent intent it espouses by consecrating its Sol Invictus monument, the Church of Satan is less enthusiastic about discussing the exploitative practices of its founder as well as the checkered history of its other founding members. Michael Aquino, who died in 2020, was a priest within Church of Satan before starting The Temple of Set following his departure from LaVey’s order. Aquino was famously renowned for his role pioneering psychological warfare linked to the CIA’s notorious Project MKUltra as well as connections to child molestation cases at the Presidio daycare center in San Francisco and others linked to Lawrence E. King’s criminal enterprise uncovered by the FBI’s investigation into the Franklin Credit Union fraud scandal.

Although there is plenty of reason to debate the integrity of the Church of Satan, the central question of the constitutionality of their display at the Illinois State Capitol is less debatable. In 2019, the United States’ government officially recognized the Church of Satan as a religion under federal law. That year, the Church of Satan was awarded tax exempt status under Section 501(c)(3) of the Internal Revenue Service Code. Despite claiming that status, the Church of Satan has repeatedly contended that it is a non-theistic group with most members joining for entirely secular reasons.

The decision of the Illinois State Capitol to display the Church of Satan’s latest monument on its grounds is a perfect display of how difficult balancing the interests of different religious groups can become. While objections to the Baphomet monument continue to be raised, they are protected under the same amendment that protects the Church of Satan’s freedom to exercise its religious beliefs. While the Church of Satan erected the display to symbolize its holiday of Sol Invictus, it does much more than represent an esoteric holiday — it illustrates the starkly juxtaposed directions followed by citizens in an increasingly polarized society with eschatological undertones that are more becoming of the prophesized end times than the revelries of the holiday season.