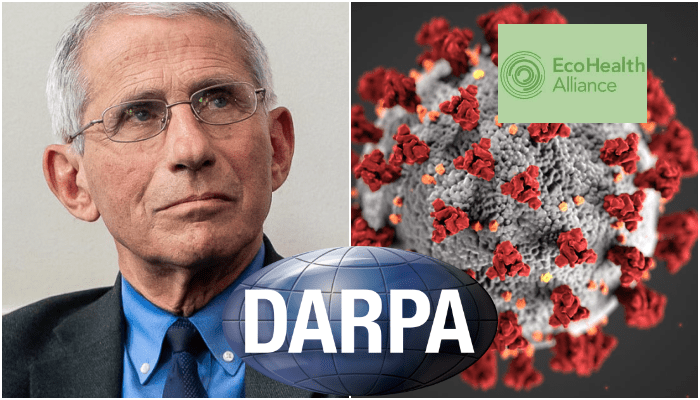 An investigation by Project Veritas has made a shocking discovery regarding the origin of Covid-19, and the gain of function research to enhance the virus. Project Veritas has claimed to access ‘never before seen’ Department of Defence (USA) documents that show that the USA’s elite military research organisation DARPA (Defence Advanced Research and Projects Agency) had rejected a proposal by EcoHealth Alliance.

The proposal that DARPA rejected was about studying bat-born Coronaviruses in Wuhan. However, the proposal that was rejected by DARPA saying it is ‘too dangerous’, was later approved by the USA’s NIAID, which is headed by Dr Anthony Fauci. The proposal was named ‘Project Defuse’.

As per the Project Veritas report, DARPA had rejected the proposal saying that it will violate the ‘gain of function’ moratorium.

In 2014, in the wake of a number of hazardous biosafety leaks in several federal research facilities, the US government had placed a temporary ban on funding studies that focused on enhancing the ability of viruses like Influenza, MERS, SARS etc.

Covid-19 is caused by a virus from the SARS family and its official name is SARS-CoV-2.

One of the documents accessed by Project Veritas is a letter by one Maj Joseph Murphy, a DARPA researcher. The letter says that SARS-CoV-2 is an American-created recombinant bat vaccine or its precursor virus. It was created by an EcoHealth Alliance program at the Wuhan Institute of Virology in China, as suggested by reporting surrounding the lab leak hypothesis.

The letter further says the details of the program have been concealed since the pandemic began. The details can be found in the EcoHealth Alliance proposal response to the DARPA PREEMPT program Broad Agency Announcement (BAA) HR00118S0017, dated March 2018.

The Project Veritas video shows a clip shared by a ‘source’ where former DARPA chief Dr Steven Walker said that DARPA had set up a Biotechnology office some years ago whose aim was to engineer microorganisms that “do what you want them to do”.

Major Murphy’s report further says that EcoHealth Alliance had approached DARPA in March 2018, seeking funding for the gain of function research into bat-borne Coronaviruses. DARPA had rejected the proposal saying it is too dangerous and will be a potential violation of the moratorium. However, the NIAID headed by Dr Fauci went ahead and approved it, and gain of function research into bat-borne Coronaviruses was carried out at several locations in the USA as well as Wuhan Institute of Virology. The full video by Project Veritas can be seen here.

Dr Fauci has stated to the US Congress under oath that the NIAID had never had anything to do with gain of function research into coronaviruses.

The report by Murphy further states that key curatives like Ivermectin, Hydroxychloroquine, and Interferons were actively suppressed.

Fauci had earlier told the US Congress under oath that the NIH has never been involved in gain of function research. But in October 2021, the NIH had contradicted that.

It is notable here that several reporters have revealed in the past that EcoHealth Alliance, headed by Peter Daszak was involved in conducting gain of function research into coronaviruses in WIV, China. Daszak was one of the first and foremost scientists to vocally dismiss the ‘lab leak’ theories. He had also published a very widely publicised letter in The Lancet at the beginning of the pandemic to dismiss all claims of ‘lab leak’.

Reports and documents had also revealed that Fauci’s NIAID had funded EcoHealth Alliance to carry out research in Wuhan.

Interestingly, Daszak was also a part of the WHO investigative team that had visited the WIV to study the origins of the Covid. Later, when Daszak’s old statements and videos emerged showing him admitting that his EcoHealth Alliance is indeed involved in the gain of function research at Wuhan, Daszak was dropped from the Lancet commission investigating Covid origins.

Somehow, the obvious conflict of interest has not been addressed by WHO or the respective governments of the USA and China so far.

A number of documents, letters and reports have so far emerged, showing the damning involvement of US scientists and bureaucrats in suppressing the truth about Covid origins.

Anthony Fauci, the head of NIAID and NIH, had stated in the past that the gain of function experiments into the virus was ‘worth the risk of a pandemic’.