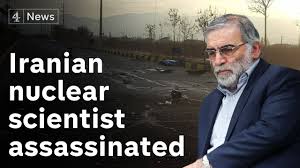 The families of slain Iranian nuclear scientists have reportedly launched a lawsuit against the U.S. demanding $100 million in compensation related to assassinations they believe are linked to America.

The campaign was spurred by the assassination of top nuclear scientist Mohsen Fakhrizadeh on a country road near Tehran in November. Iranian officials have blamed Israel for the killing and suggested the U.S. may have supported, or at least known, about the operation.

Fakhrizadeh was widely considered the father of Iran’s nuclear program and headed the Organization of Defensive Innovation and Research—known by its Farsi acronym, SPND—which is responsible for nuclear research for military applications, plus work-related to Iran’s ballistic missile technology.

The official Fars News Agency reported Wednesday that 15 lawyers and attorneys are working on the case. They are led by Somayyeh Afzali Nikoo, who said the case was opened and registered at a Tehran court on Sunday.

Afzali Nikoo did not name individuals included in the action, which without any international jurisdiction will amount to nothing more than a symbolic rebuke of the U.S. and Israel.

“Committing criminal acts against innocent people for any reason is a terrorist act and can be prosecuted,” Afzali Nikoo told Fars.

The case is being brought against Israel, the U.S. government, and multiple U.S. presidents. Also involved are unnamed American officials, including within the State Department and the Treasury.

Fakhrizadeh is the latest Iranian nuclear scientist to be assassinated inside the country.

Such operations were more common before the signing of the Joint Comprehensive Plan of Action in 2015, which placed curbs on Iran’s nuclear program in exchange for sanctions relief.

Before that, the U.S. and Israel conducted more covert efforts against Iranian nuclear targets and the scientists involved in related research.

This included assassinations, reportedly primarily conducted by the Mossad Israeli secret service with U.S. knowledge, allegedly with the help of opposition Iranian groups including the People’s Mujahedin Organization of Iran, or MEK.

Israel has always refused to confirm or deny involvement in covert actions like these, a policy known as “strategic ambiguity.” But Western and American intelligence officials have anonymously briefed the media on Israeli involvement, including in the Fakhrizadeh killing.

Between 2010 and 2012, at least four Iranian nuclear scientists—Masoud Ali Mohammadi, Majid Shahriari, Darioush Rezaeinejad, and Mostafa Ahmadi Roshan—were assassinated in shootings and bombings. Another, Fereydoon Abbasi, was seriously wounded in a bombing on the same day Shahriari was killed.

Iran has also claimed to have foiled additional Israeli assassination attempts against scientists in 2015 and 2018. American intelligence firm Stratfor claimed scientist Ardeshir Hosseinpour died after being poisoned by Mossad in 2007, which Tehran denied.

Fakhrizadeh’s killing marked a serious escalation of the effort to undermine Iran’s nuclear research and destabilize the regime, with the JCPOA stuck in the doldrums and Tehran refusing to negotiate a new deal with the Trump administration.

The White House has been increasing pressure on Tehran since the election, seeking to undermine President-elect Joe Biden’s expected efforts to restart dialogue with Tehran and revive the JCPOA.

Indeed, this week Secretary of State Mike Pompeo accused Iran of harboring Al-Qaeda militants, describing the country as the organization’s new “home base” and urging other nations to take action.

Iran denied the accusation, and it denied reports that Al-Qaeda leader Abu Muhammad al-Masri was assassinated in Tehran in August. Pompeo said Tuesday Masri’s killing was proof of Iranian cooperation with the Sunni extremist group.

Islamic Revolutionary Guard Corps commander Major General Hossein Salami said last week that “harsh revenge and punishment is on agenda” for those responsible for the killing.