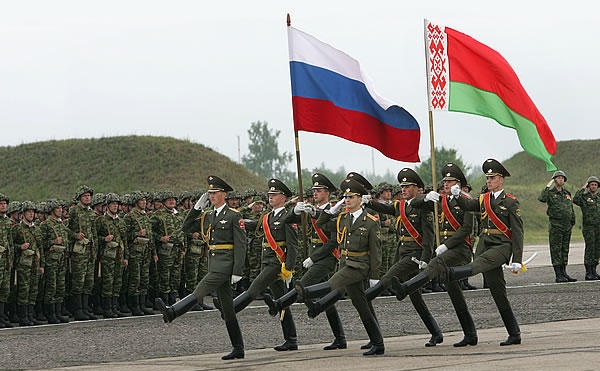 [A Texan who enlisted as a freedom fighter in eastern Ukraine, author Russell Bentley claims that Biden administration war hawks and neo-Nazi Ukrainian officials are plotting a “false-flag” chemical warfare attack to blame on Putin as a pretext for declaring war.—Editors]

The U.S. and Ukraine are secretly preparing for all-out war while advancing propaganda to make it appear that Russia is the aggressor. Diplomatic talks in Geneva by the U.S. and Russia have failed to alleviate tensions because the U.S. refused to adhere to Russia’s demand that Ukraine “never, never ever” become a member of the North Atlantic Treaty Organization (NATO). Deputy Secretary of State Wendy Sherman stated that the U.S. would “not allow anyone to slam closed NATO’s Open Door policy.”

Since the February 2014 Maidan coup—where worshippers of Nazi collaborators Stepan Bandera overthrew Ukraine’s democratically elected pro-Russian leader Viktor Yanukovych—the U.S. has provided $2.5 billion in military aid to the Ukrainians, including $450 million in 2021 alone. (Since 2014, the EU has provided 17 billion euros to Kyiv!)

This aid has included 100 Javelin rocket launchers and at least 500 rockets, along with training in their use.

Other NATO countries, including Canada, UK, Poland and Turkey have provided weapons, training and intelligence. Turkey has provided Bayraktir attack drones, and instructors, and both the Javelins and the drones have been used in combat against the Donbass Republics’ defense forces.

Ukraine itself has recently required women between the ages of 18 and 60 to register for the draft, including pregnant women and mothers with young children. Meanwhile, NATO already has 13,000 troops, 200 tanks, 400 APCs and 3 dozen aircraft and helicopters stationed in Eastern Europe, and there are currently 10,000 NATO “instructors” in Ukraine (including 4,000 from the United States). In early December, the Greek port of Alexandroupolis received the largest shipment of U.S. military equipment in its history, including helicopters, UAVs, tanks, IFVs and artillery for the annual NATO exercise “Atlantic Resolve.”

US and Ukraine continue preparations for assault on Donbass Republics

In early December, the water of the Severdonetsk River—which supplies more than 90% of the municipal tap water to all major cities of the Donetsk People’s Republic (DPR) in eastern Ukraine (as well as major cities of Donetsk Oblast under Ukrainian control)—was contaminated by chemical and biological agents from sources in Kharkov and Slavyansk.

This contamination—augmented by “fracking” in the areas of Donetsk Oblast under Ukrainian control—has resulted in the tap water of the DPR being unsuitable for cooking or drinking.

Contamination and/or denial of drinking water for civilian populations constitutes a “grave breach,” and thus qualifies as a war crime, under both the Nuremberg Tribunal Charter and the Fourth Geneva Convention.[1]

The chemical attack on the Severdonetsk River is not the only chemical and biological threat against the Donbass Republics by Ukraine and its Western sponsors.

Russian Defense Minister Sergei Shoigu reported on reported on December 21st that 120 U.S. mercenaries received deliveries of chemical weapons in the Ukrainian occupied frontline cities of Avdeevka and Krasny Liman for use in a possible false-flag attack that could be blamed on Russia.

Press Secretary of the DPR Defense Ministry Eduard Basurin confirmed that Ukraine had received several batches of toxic substances, botulinum toxin and an antidote to it from the U.S.

In addition, “Another container weighing 300 kilograms was delivered to Mariupol by sea, where there was a chemical warfare agent—dibenzoxazepine, which is used in the form of an aerosol.”

In the southern sector of the Front, near Mariupol, citizens of the frontline village Granitnoye have reported Ukrainian soldiers in full chemical/biological protective suits unloading containers.

These reports do not bode well for a peaceful settlement of the conflict in Ukraine which threatens to expand into a full-fledged war involving the U.S. and Russia.

The reports bring to mind the widely and completely debunked and exposed multiple false-flag attacks by (U.S. and NATO-backed) ISIS terrorists in Syria, in which innocent civilians were slaughtered in order to use them in “White Helmet” propaganda videos, falsely blaming the mass murders on chemical attacks by the legitimate Syrian government.

Russian President Vladimir Putin and Foreign Minister Sergey Lavrov have said multiple times that Russia is prepared to use military force if either its citizens in Donbass or its strategic national interests are further threatened by Ukraine or NATO.

Russia, however, first has proposed a diplomatic solution that the U.S. appears to be rejecting.

On December 17, 2021, Russia published a draft of a pair of treaties for mutual security guarantees between Russia, the U.S. and NATO, with eight specific articles, the first of which is a demand for equal recognition of the security interests of both countries.

The second article requires both countries to adhere to the basic principles enshrined in the United Nations Charter. The third article prohibits the signatories from using the territory of third countries for preparation of armed attacks. The fourth article is very specific—the United States shall prevent the further eastward expansion of NATO and deny NATO membership to any further former USSR Republics, meaning specifically Ukraine, Moldova and Georgia.

The fifth article prohibits either side from deploying weapons in international and third-party spaces to provoke or threaten, including agreement on maximum-approach distances of warships and aircraft. The sixth article is the prohibition of deployment of short and intermediate range missiles outside of the national territories of the parties, or where said missiles could threaten the other party.

This treaty is wise and highly equitable, a framework for de-escalation and a drawback from potential nuclear war. If the U.S. or NATO fails to ratify this treaty, Russia has made clear that it will enforce the provisions of the Treaty by military means.

Russia is not bluffing, and they do have the technical and military ability to do so. If the U.S./NATO refusal to ratify the treaty or further provocations in Ukraine lead to war, the onus will absolutely be on them and not on Russia. NATO armies, weapons and military infrastructure have advanced literally all the way up to the Russian border, and as Vladimir Putin has noted, “There is nowhere left to retreat.”

The treaty is not an “ultimatum,” rather it is the only feasible alternative to serious military confrontation that can easily lead to a major war. Unfortunately, it appears that Ukraine and NATO, led by the U.S., have no intention of pursuing the diplomatic option, and continue preparations and provocations that can and will lead only to a military response by Russia.

On December 21st, four days after the Russian treaty proposal was published, Ukraine, on U.S. and NATO orders, with reckless impudence again amended the Ukrainian Constitution to allow foreign troops to operate on Ukrainian soil, in preparation for multiple NATO exercises to be held in Ukraine in 2022.

These include nine maneuvers to be carried out in 2022, and the number of  military personnel participating in them will almost double compared to 2021—to 64,000.

The number of aircraft and helicopters will more than triple—to 361—and warships almost four times—to 256. This is a tremendous military escalation, and while Russia can easily handle the Ukrainian military alone, Russia will be faced with a much more formidable foe if the NATO reinforcements are in place before hostilities commence.

Russia’s window of opportunity for a preemptive strike is a matter of weeks, and on December 29th, President Putin announced that Russia and Belarus have scheduled military exercises of their own for February and March of 2022.

It is quite possible and even “highly likely” that these “exercises” will be conducted not in Russia or Belarus, but in Ukraine itself. This possibility has already prompted the UK to announce plans to evacuate its soldiers and the U.S. to begin preparations to evacuate its citizens from Ukraine.

February 4, 2022, will be the opening day of the Winter Olympics in Beijing, and Putin has announced his intention to attend. The U.S. and NATO have a history of initiating military and geopolitical confrontations during the Olympics, as was seen with the Maidan coup in 2014 during the Sochi Olympics and the Georgian attack on South Ossetia during the 2008 Summer Olympics in Beijing. All the above factors have led many analysts, including this author, to predict the start of major military operations in February 2022.

If the collective “West”—U.S./NATO—continue their advances and attacks against Russia, Russia also has multiple options of the non-kinetic variety with which to respond. Economic, technical and political means that can teach, even in a non-military way, what Vladimir Putin once described as “the true meaning of pain.”

Russia’s electronic warfare capabilities are currently unmatched in the world. The Murmansk-BN system has the ability to suppress radio and satellite communication over a distance of 3,000 kilometers, and has proven effective against hard targets like the U.S. F-35. Operating from within its own territory, Russia can suppress not only military aircraft, but civilian air traffic and ground transport and other communication over the entirety of Europe, including the UK.

Russia can play the energy card—the EU’s dependence on Russian oil and gas (47% in 2021) has become painfully clear this year, but it is a little known fact that Russia is the U.S.’s third largest supplier of petroleum products. In 2020, the U.S. imported 538,000 barrels per day from Russia, and even more in 2021. Russia’s supply accounts for 7% of all U.S. petroleum imports, and while an energy loss of 7% would be a major blow to the U.S., Russia can easily divert these shipments to the East and sell them there.

Were Russia to cut off its energy supplies to the EU, the economic devastation would be immediate and immeasurable. And the physical and infrastructure destruction would be even worse. People would literally freeze to death, pipes would freeze and burst, factories would be shut down and deteriorate, never to be re-opened. That is actually happening now in Ukraine. The U.S. and EU should take a look at that and take a lesson from it.

The Russia-China strategic partnership is not only military, it is economic. The U.S. economy today is a façade, a paper tiger with no real strength or foundation. The U.S. national debt is officially $30 trillion, more than 90% of GDP, and the true number, including U.S. government “unfunded liabilities” including $21 trillion for Social Security and $33 trillion for Medicare, is perhaps as much as ten times higher. It is a debt that can and will never be paid.

A combined economic assault by Russia and China against the U.S. dollar would cause inflation of Zimbabwean proportions. Soldiers do not fight if they are not paid, cops and government bureaucrats do not work if their paychecks are worthless, and citizens loot and riot if they cannot afford food. And if the U.S. economy implodes, it will take the EU economy with it. And vice versa.

All (or any) of these non-military moves would paralyze the economies and governments of virtually all NATO countries, inflicting a crushing defeat on the U.S. and EU without firing a shot. But Russia does have full justification and compelling motives for a military response as well. And if done correctly, it could result in total victory in a quick and relatively bloodless fashion.