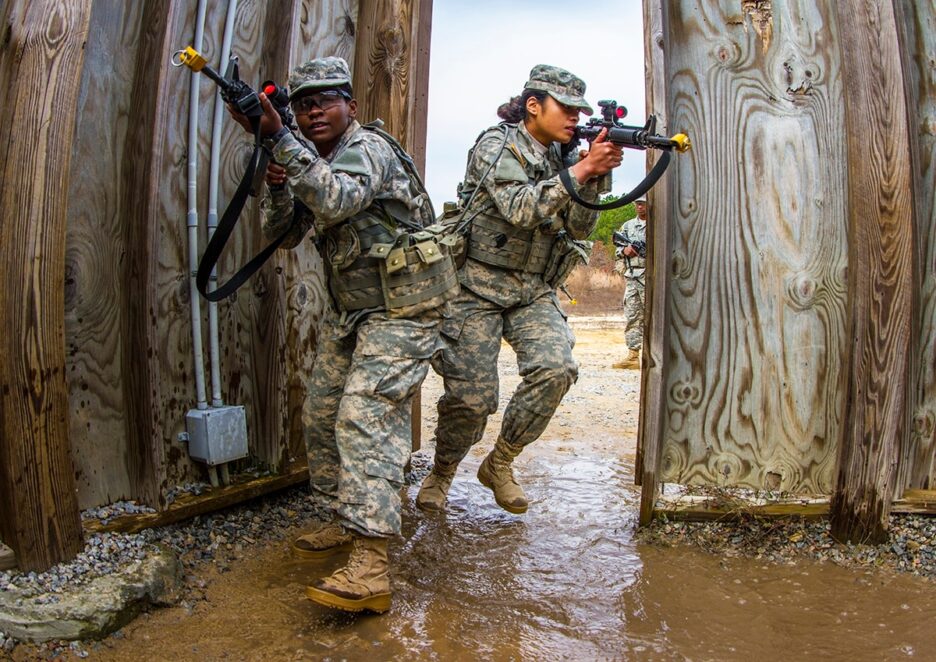 Young Army soldiers will be battling ‘seasoned freedom fighters’ across two dozen North Carolina counties in a two-week ‘guerrilla warfare exercise’ where they attempt to overthrow an ‘illegitimate government’.

News of the training exercise comes just days after the anniversary of the Capitol riot and as the Justice Department announces the creation of a new ‘domestic terrorism’ unit to tackle what officials said is an ‘elevated threat from domestic violent extremists’.

Some questioned the close timing of the events, while others went further with fears that the Biden administration is ‘preparing for American Uprising’.

‘Biden’s military wargames fighting and killing American “Freedom Fighters” in guerilla (sic) warfare,’ one Twitter user posted in reaction to news of the guerilla warfare training on US soil.

Another Twitter user even questioned if the government was ‘trying to get troops accustomed to the idea of killing fellow Americans?’

However, the guerilla training exercise, known as Robin Sage, has actually been running every few months since the 1970s.

During Robin Sage training, young soldiers will face off against seasoned service members from units across Fort Bragg, acting as opposing forces and guerrilla freedom fighters, as well as ‘specially trained’ guerilla civilians.

Some social media users find the exercise concerning as the 143-year-old Posse Comitatus Act bars federal troops from participating in civilian law enforcement except when expressly authorized by law. The legislation cites military interference in civilian affairs as a threat to democracy and personal liberty.

Others have implied the exercise is preparing soldiers to prevent an insurgence and fear it is training American troops how to fight their own people.

The Robin Sage exercise, which serves as the final exam in Special Forces Qualification Course training, will begin January 22 at an undisclosed location on private land.

It places soldiers in the ‘politically unstable’ fictional country of Pineland and forces them to conduct reconnaissance, raids, ambushes, and numerous other operations a ‘numerically superior enemy’.

‘The Special Forces candidates have to meet up with and make rapport with a third-world nation guerrilla force, train them up, and then work by, with, and through that guerrilla force to conduct combat operations against a numerically superior enemy occupying force,’ retired Special Forces warrant officer Steve Balestrieri, who typically runs the course, told Business Insider.

The US Army John F. Kennedy Special Warfare Center and School, which conducts the Robin Sage exercise, said teams are placed in a ‘real world setting characterized by armed conflict’ and presented with war-crime scenarios, such as a partner force wanting to execute a prisoner or destroy a village.

The soldiers are then tasked with negotiating the situations without violating war laws or losing the support of their allies.

‘To add realism of the exercise, civilian volunteers throughout the state act as role players. Participation by these volunteers is crucial to the success of this training, and past trainees attest to the realism they add to the exercise.’

Several citizens, however, are concerned the exercise encourages soldiers to target civilians.

‘Whether this is a routine exercise or not, the fact that it seems plausible that our own military is training on how to combat its own citizens is telling,’ Scott M. argued in a comment on an article about the training.

‘Over the past year. we’ve heard our very own commander in chief mock the ability of an armed citizenry to defend itself against government tyranny. That ability is foundational to our bill of rights and he seems to think it’s a joke.’

Despite the online criticisms, those familiar with the course allege the interactions between the ‘team’ and the ‘guerrillas’ could determine the success or failure of a mission on the battlefield.

‘We had packed everything in preparation for more than two weeks in the field with no resupply. Two Blackhawk choppers dropped us off behind enemy lines where we were to meet our partner force in the middle of the night,’ he explained.

‘We walked and walked with this guy for hours in what seemed like a circle — he was lost. The captain asked to help him navigate with the map. Turned out we had been circling the camp for hours and the solution was simple — ask if he needed help.’

The retired service member argues the most important aspect of the training exercise is the hands-on lessons it provides about Special Forces operations and the prevention of a resistance or insurgent force taking power.

‘As a Green Beret, I feel Robin Sage is imperative and really gets you to think about the real mission of Special Forces, to work with and through a partner force,’ Black said.

‘Very little of what a Green Beret does is kicking in doors and getting bad guys. Robin Sage definitely helped prepare me for life as an operator on a team,’ he added.

Balestieri echoed Black’s statements, saying: ‘What makes Robin Special is how well and smoothly it’s run from the time the student teams go into isolation until they [infiltrate] and are actively engaged with the G-Force.’

‘It rams home how important is, when operating in a guerrilla warfare/unconventional warfare environment, to at least have the nominal support of the population.’

Robin Sage training – named after Col. Jerry Michael Sage who was captured by Nazis and attempted to escape more than a dozen times before succeeding – has been conducted since 1974.

Public notice of the ‘premiere unconventional warfare exercise’ became priority in 2002 after a student was killed and another injured when North Carolina sheriff’s deputy mistook the exercises for criminal activity.

Military officials claim all ‘Robin Sage movements and events have been coordinated with public safety officials throughout and within the towns and counties hosting the training.’

They warn residents may hear blank gunfire and see occasional flares, but reiterate ‘controls are in place to ensure there is no risk to persons or property.’