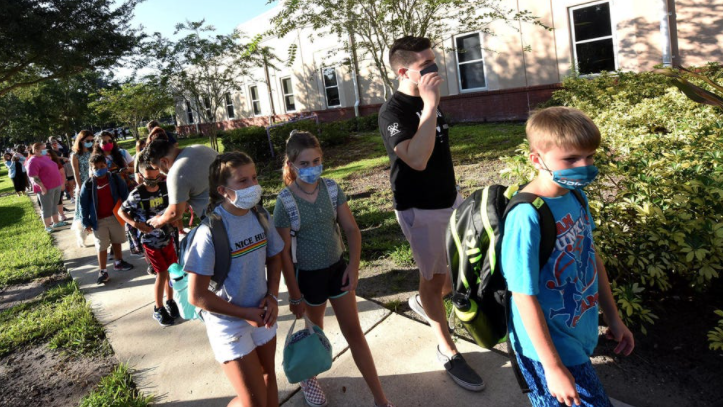 As the omicron coronavirus variant surges in Florida and spurs new concerns about Covid-19 transmission in schools, the eight Florida school districts that defied a state ban on school mask mandates—generating national controversy and losing state funding—have refused to oppose the bans this time, with five of the districts imposing mask policies that only apply to adults, but not students.

School districts in Miami-Dade, Broward, Alachua, Duval and Palm Beach counties imposed new mask policies for adults on school property only, though Broward requires them only for school visitors and vendors and not employees.

Those five counties—along with three others (Orange, Leon and Brevard)—lost some state funding last October after the state education board sanctioned them for defying a state ban on mask mandates (the funding was restored in November after the Covid rate reduced, and the mandates were dropped).

Florida strengthened its school mask mandate ban in November as Gov. Ron DeSantis signed a bill into law that stipulates only parents can decide whether or not their children wear masks to school.

School officials cited the state law as the reason they were unwilling to impose mask mandates that apply to students, with Broward County school board chair Laurie Rich Levinson saying the board’s “hands are tied.”

43,168. That’s Florida’s seven-day average of new Covid-19 cases, according to public health data compiled by the New York Times, higher than any other state besides New York. Cases have gone up by 765% over the past two weeks, according to the Times, more than any other state. The surge in cases has led to miles-long lines for Covid-19 testing in Florida and a shortage of monoclonal antibodies used to treat the disease. Critics have called for DeSantis to reopen state-run testing sites as a result—and criticized him for staying out of the public eye over the holidays as cases spiked.

“It’s embarrassing how Governor DeSantis has made the district vulnerable and susceptible to the rapid spread of this disease among children,” Karla Hernandez-Mats, the president of United Teachers of Dade, said in a statement after the county imposed its school mask mandate for only adults.

WHAT TO WATCH FOR

Whether the Florida law banning school mask mandates will be upheld in court. A group of parents resubmitted a lawsuit challenging the state policy Monday after it previously failed in federal appeals court, citing the new threat from the omicron variant as reason to reconsider the case.

The Florida law banning school mask mandates applies only to public schools and does not affect private schools. Catholic schools in the Miami area now have a mask mandate in place for both students and staff as a result, the Archdiocese of Miami announced Saturday.

Florida is one of at least ten states that have banned or heavily restricted schools from imposing mask mandates—though some have been struck down or blocked in court—while Education Week reports an additional 16 states and Washington, D.C., require masks in schools. The nationwide spike in Covid-19 cases linked to the highly transmissible omicron variant has prompted widespread concern about transmission in schools and led to some mask mandates being reinstated, including in districts in Indiana, Ohio and West Virginia. President Joe Biden and numerous state and local leaders have been adamant about keeping schools open for in-person learning amid the surge, and new federal “test-to-stay” guidelines encourage students to remain in school after a Covid-19 exposure as long as they test negative. Many schools have still been forced to move to remote instruction as classes resume after the holidays, however, including districts in Atlanta, Detroit and Milwaukee. Data company Burbio reports more than 2,700 schools are closed this week.