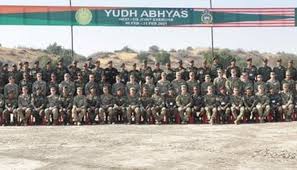 The India-US joint military exercise ‘Yudh Abhyas 20’ commenced on Monday in Mahajan Field Firing Range of Bikaner district in Rajasthan. This is the 16th edition of the annual bilateral joint exercise of both the armies and will continue till the 21st of this month. The previous version of the joint exercise was held in Seattle in the United States.

Brigadier Mukesh Bhanwala, Commander of the 170 Infantry Brigade of the Indian Army, welcomed the US contingent at the firing range and impressed upon both the armies to achieve optimum cohesion and interoperability during the exercise.

He laid stress on the importance of the free exchange of ideas, concepts, and best practices between the troops and the necessity to learn from each other’s operational experiences, defense spokesperson Lt Col Amitabh Sharma said.

The official said a number of aerial platforms, including the newly inducted indigenous Advance Light Helicopter WSI ‘RUDRA’, MI-17, Chinooks, Stryker Vehicles of the US Army and BMP-II Mechanised Infantry Combat Vehicles of the Indian Army, will be utilized in the exercise, which will go on till February 21.

The drill comes days after the air forces of India and France held a five-day joint exercise in Rajasthan in January.

About 250 soldiers from each side are participating in the exercise. The two armies will share their war-related techniques, skills, and experience with each other during this exercise. The exercise is one of the largest military training and defense cooperation efforts between India and the United States.